I used to blog on another platform. Check out what I shared in earlier years here.

At the beginning of Term 3, my teacher brought some very ugly and gross potatoes. into class. We didn’t want to touch them at all. Then later, my teacher brought some new and very pretty potatoes to class and we used these to make our own potato people. My potato looked like a normal person but in a potato body.When I was making my potato I used some shiny  things for the eyes and I used some fabric for the mouth and  some other fabric for its clothes and I gave it  some purple hair with a fringe.

A week later we made these little movies  in groups.  The potatoes we made were used in making the little movie. There are 4 jobs people use to make a movie and they are the director, camera man, scene manager and editor. I really liked being the scene manager because I liked moving all the potatoes slowly for each photo.

Some days later we started making the background stuff and we had to make a rocket,evil layer and castle  and i was making the rocket. 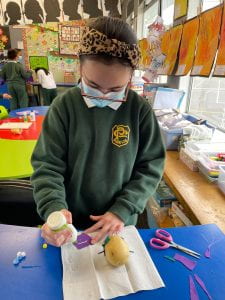 The Stolen Princess  is the name of our Class movie. This is a brief outline of the story: once upon a time there was a princess and it was her birthday but something terrible happened. The princess was captured by an evil monster so the royal astronauts went into space to save her and they went back home and continued the birthday party. They lived happily ever after. I can’t wait to see our stop motion movie at the Manaiakalani Film Festival next term.

4 thoughts on “Making our class movie”

About Me | Ko Wai Ahau

Add the link to the About Me blog post here.

Keep connected with this blog